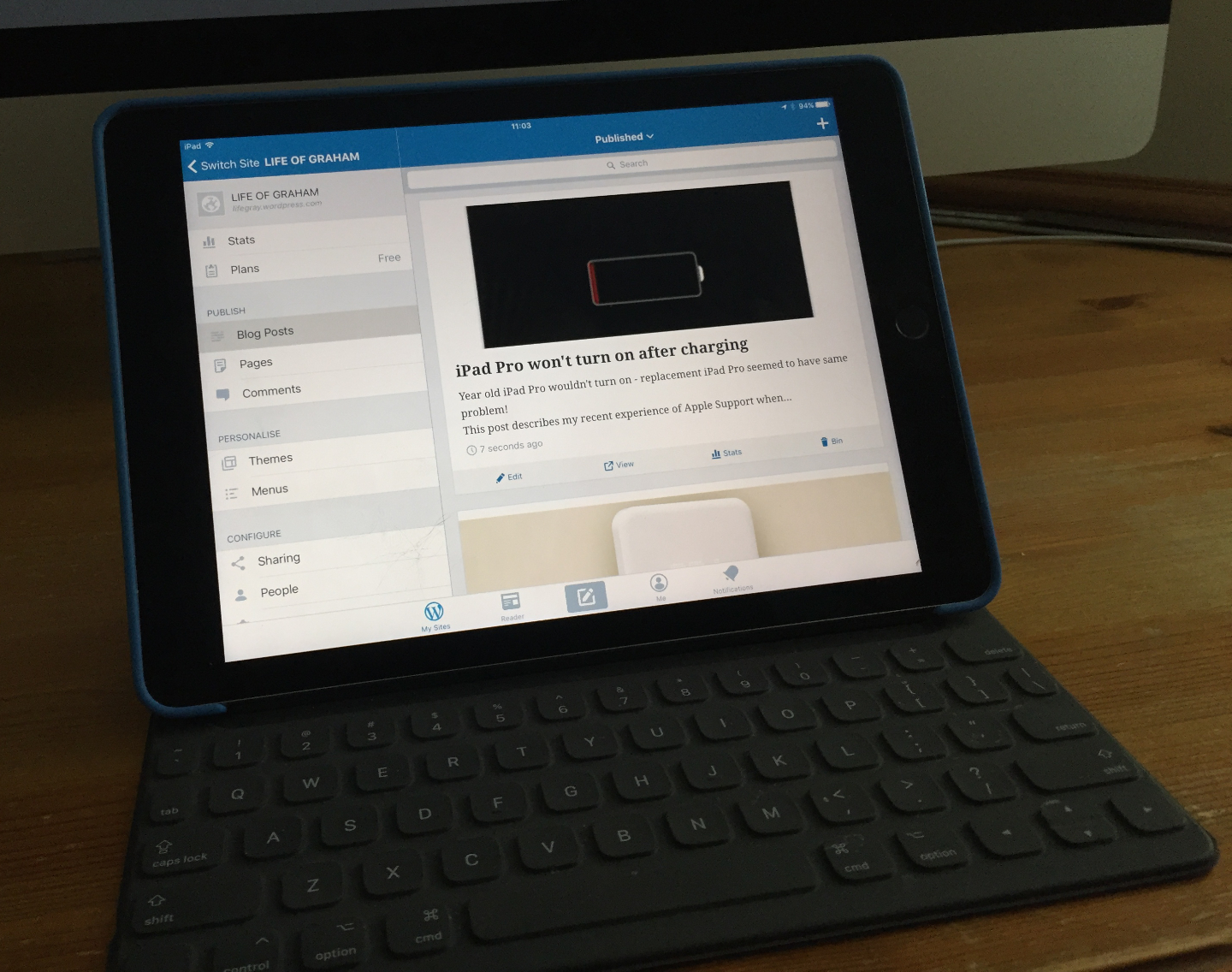 This post describes my recent experience of Apple Support when my 9.7″ iPad Pro stopped working and I received a replacement iPad Pro which didn’t appear to turn on. Had I being given my faulty iPad back by mistake, or had I received another faulty iPad? After three visits to my local Apple Store, almost two weeks later and quite a bit of stress, I now have a working iPad which I’m writing this on. I also know a lot more about battery charge cycles and how long an iPad takes to power on when its battery is completely flat. 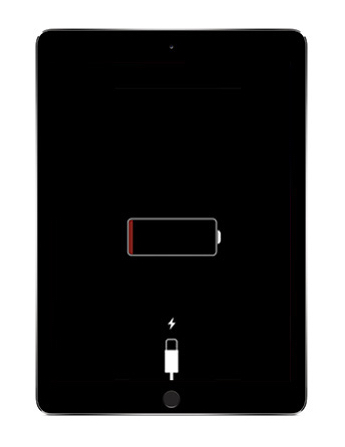 ad Pro won’t turn on after charging all night

I have got into the habit of charging all my Apple devices (9.7″ iPad Pro, iPhone 6 and Watch) overnight on my bedside table. This works well as I never usually need to charge anything again during the day. Except one morning, about two weeks ago, when I went to wake up my iPad Pro only to find the dreaded low charge screen telling me visually to plug in a charger.

I tried charging it with a different cable and charger – normally I just plug the lightning cable into a USB socket built in to the wall socket. Still no joy.

I decided to book a genius appointment at my local Apple Store for that afternoon. The engineer assigned to me confirmed that my iPad Pro wouldn’t turn on and initially informed me that Apple would replace it with a new unit free of charge, even though the 12 month warranty had expired a couple of weeks previously. She said that they didn’t have any replacement units in stock so it would take 3-5 days for them to get one for me.  It was clear that the replacement unit was not coming from their sales stock, as I had checked that online before leaving home to make sure they had one in stock with the right specification, i.e. iPad Pro 9.7″, Slate Grey, 128GB, Wifi + Cellular.

Before confirming the replacement, the engineer spoke to her manager who asked her to run some more in depth diagnostics. This brought up something different, which prompted her to tell me that my iPad would need to be sent to their repair depot for further investigation and that it might take 7-10 working days. I would no longer be guaranteed a free replacement unit and might have to pay £290 to get a replacement. I was asked to sign a document confirming this and also to enter my Apple ID and password into an application that would turn off “Find my iPad”. Reluctantly I agreed, feeling mistrusted by Apple. Did they think I had mistreated my iPad and caused the failure to happen (for example, I had immersed it in water!).

I got a phone call from my local Apple Store 9 days later (or 6 working days due to the May bank holiday) and was told that I could have a free replacement under Consumer Law. The replacement iPad was at the store and ready to collect. I was glad to be vindicated that I had not caused the fault myself!

Once in the Apple Store I was brought my replacement iPad Pro by one of the backroom staff. He took out the iPad Pro from a plain cardboard box and handed it to me wrapped only in a protective sleeve. It was clear now that this iPad had not been taken from the Sales Stock. At the time I thought nothing of it and happily left the store with my replacement iPad. I was looking forward to getting it home and restoring it using my iCloud backup.

Once home I turned on the replacement iPad I had received and was shocked to see the flat battery screen again! I duly plugged in a charger and waited for the iPad to start up. Nothing happened, so I switched to another charger and tried that. Nothing! I then plugged it into my iMac using a third lightning cable. Still it wouldn’t turn on! At this point I called Apple Support and asked  them what I should do. Once we had checked that the replacement unit had a different serial number to my original iPad, I was advised to take it back to the Apple Store and demand a brand new unit from their Sales Stock. A case was opened for me and the number emailed to me. Back I went to the Apple Store.

It is a 10 mile drive to the Apple Store and 30 minutes later I was there. I was greeted by a dispatcher who told me that I would need a Genius Bar appointment and it might take up to 30 minutes before someone could see me. He suggested I should go and get a coffee and wait for a text. I turned round and walked out the door and found the nearest Costa. Before the barista had managed to pour my medium, skinny cappuccino I received a text telling me to return to the Apple Store. I asked for take away cup and carried it out.

After 15 minutes the replacement iPad finally came to life

Once in the Apple Store again, I was told to sit on a stool at the Genius Bar and wait for a support engineer to see me. I was shortly greeted by the store’s support manager who proceeded to plug in a charger to my dormant replacement iPad. I explained that I wanted a totally new iPad as a replacement and that I didn’t want another “refurbished” unit that didn’t work. He explained that all replacement units were brand new units but may have been on the shelf for a couple of months. Hence the flat battery. He went on to say that he had seen iPads take up to an hour to turn on after the battery had been completely drained! We debated the likelihood of this iPad having the same fault as my original and I was impressed by his confidence that this iPad would eventually come to life. Low and behold after 15 minutes it sprung to life. Still not convinced that this wasn’t a refurbished unit and didn’t contain any previously used parts I asked the support manager to prove it. In response he hooked some advance diagnostics and showed me that it passed all the tests. Next he showed me the battery life which indicated greater than 110% remaining life (?) and that no charge cycles had been completed – a totally unused battery. He then showed me the date of manufacture – November 2016 – this meant that this iPad had probably been on the shelf for around 6 months! At this point I decided that I probably wasn’t going to get a totally brand new iPad and accepted the replacement on offer.

I’m very pleased that Apple replaced my faulty iPad Pro under Consumer Law (that is outside the 12 month warranty) and didn’t put the onus on me to prove that my device had the fault in the first 6 months I’d owned it.

I’m not so pleased that I was given a replacement iPad Pro with a totally flat battery and no prior warning that it might take up to an hour before it would come to life! I’ll be sure to let them know that when I fill in their customer service questionnaire.