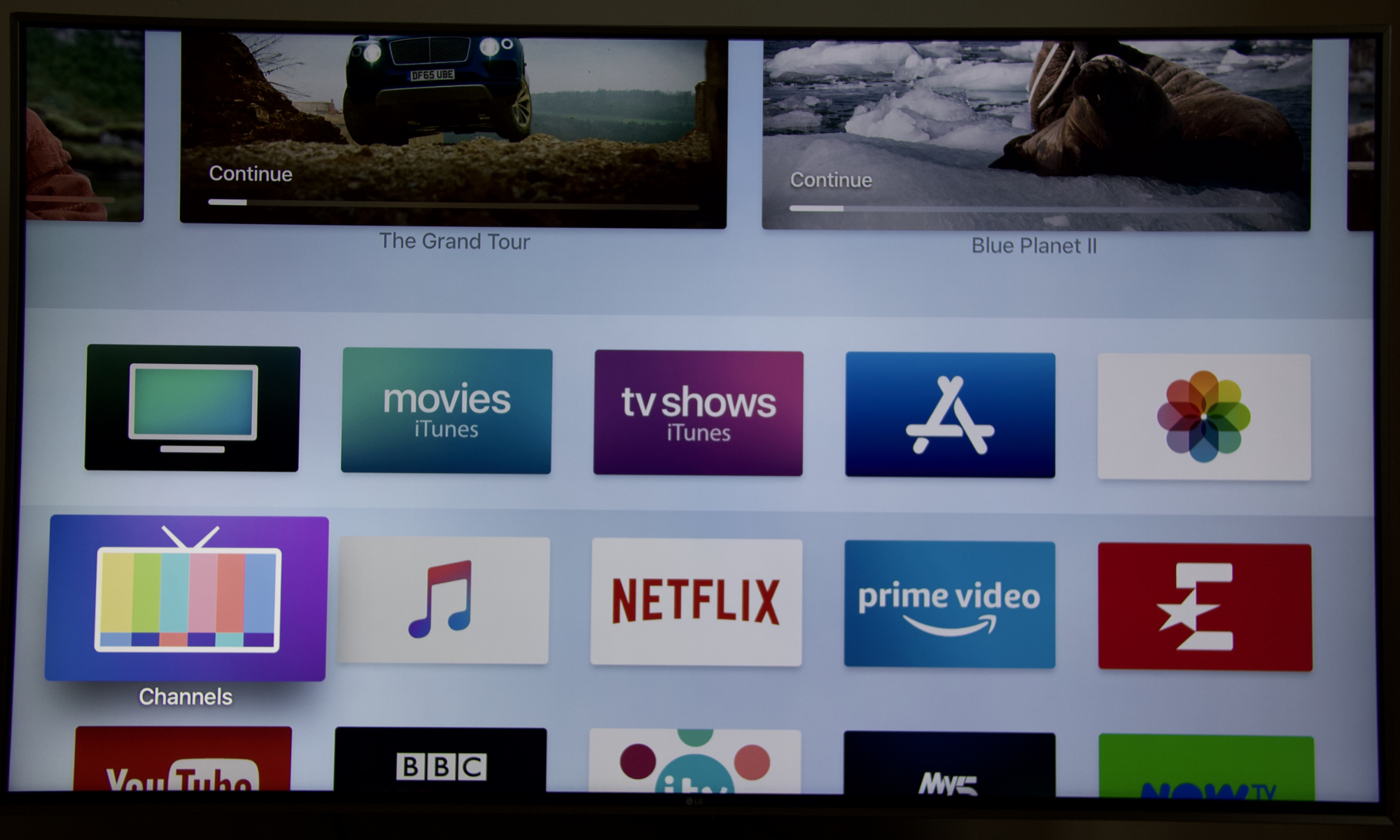 I’ve been looking for a solution which would enable me to watch live and recorded Freeview HD channels using either a 4th or 5th generation Apple TV.  My ultimate aim is for every television in the house to have equal access to ‘free to air’ content and everything I’m subscribed to. I guess my ideal solution would comprise a combination of Freeview HD, Sky Sports, BT Sport, Netflix, Amazon Prime Video and YouTube all on a single box. Unfortunately, none of Sky, BT, and Virgin (even if I was in a Virgin area) offer all of those. So what’s the solution and what compromises do you have to make?

Since the launch of the 4th generation Apple TV in September 2015, the Apple TV has steadily gained apps from the leading providers of TV channels in the UK. This accelerated with the launch of the 5th generation Apple TV, or Apple TV 4K, in September 2017. It now has BBC iPlayer, ITV Hub, My 5, Now TV (Sky’s Entertainment, Film & Sport streaming service) and Eurosport Player which all provide access to live channels as well as catch up services. In addition you can buy or rent films and TV programmes from the iTunes Store as well as stream content from Netflix , Amazon Prime Video and YouTube.

There are a couple of notable exceptions that don’t have Apple TV apps, yet. These are All4 (Channel 4’s catch up app) and BT Sport. However, both All 4 and BT Sport have iOS apps which enable them to ‘airplay’ their content to the Apple TV. It would be so nice if they were to port their iOS apps to tvOS so that the experience was more seamless.

Catch up TV is great for watching recorded programmes. However,  some catch up services won’t let you watch a programme on catch up until 24 hours after it’s aired and they are deleted after a month. What if you want to watch it later the same evening or more than a month later? The answer is to record it yourself.

Up till now the hard disk recorder was the answer. Think Sky+ HD, BT Youview+ or Virgin TiVo. Until Sky Q arrived, with its Sky Q Mini boxes, you had to have a hard disk recorder for each television. That meant you had to change rooms depending on where you recorded a programme you wanted to watch. However, having a Sky Q subscription just to record Freeview/Freeview HD channels is a bit over the top.

Now there’s a way of replicating the Sky Q functionality for Freeview HD programming. It’s called the HDHomeRun Connect made by SiliconDust based in Pleasanton, California.

The HDHomeRun Connect is a network attached TV tuner which connects via ethernet cable to your home network’s router, either directly or via an ethernet switch. The current offerings can play up to 2 streams of live HD TV to computers, tablet and smart phones on the same network. SiliconDust, and some of its partners,  are now offering digital video recording (DVR) applications that run on Macs, PCs and Network Attached Storage solutions. One of the partners, called Fancy Bits, has also developed a really slick Apple TV front end to the HDHomeRun hardware called Channels and offers its own Channels DVR, which is controlled via the Channels app on the Apple TV, iPad or iPhone.

SiliconDust have recently announced a new generation of the HDHomeRun Connect hardware for the UK market that supports either 2  or 4 DVB-T2 tuners. The 4 tuner solution will allow you to watch and/or record up to 4 concurrent programmes. In addition, it announced at CES in Las Vegas last week that it will be offering later this year an integrated twin tuner solution with a built hard disk drive providing networked DVR functionality in a single box. That definitely sounds like it’s going in the right direction.

What are the positives of an Apple TV 4K solution today?

Let’s start with the positives of an Apple TV 4K based solution. First you get to experience full quality 4K HDR programming from the iTunes Store, Netflix, Amazon Prime Video and YouTube (soon hopefully). A lot of other content is streamed in either 1080p or 720p quality.

You will also be able to watch pretty much all available live programming in the UK, subject to having a valid subscription, using the various subscription apps or catch up services. The notable exceptions being Channel 4 and BT Sport which can be cast to the Apple TV using Airplay, though.

If you have a network attached TV tuner, such as the SiliconDust HDHomeRun, you can watch all free to air Freeview/Freeview HD channels on the Apple TV. Going a step further, you can add a software digital video recorder to your solution and recorder multiple simultaneous Freeview/Freeview HD channels to a hard disk drive connected to a PC, Mac or Network Attached Storage device.

What are the negatives of an Apple TV 4K solution today?

Unless you have a Sky Q 2TB main box you won’t be able too watch Sky Sports, Sky box sets or Sky Movies in 4K HDR. The Now TV service that streams Sky’s content on the Internet won’t support better than 720p.

The only way to view BT Sport’s 4K UHD content is to have a BT TV Youview+ 4K UHD set top box.

If you don’t have BT broadband, your broadband supplier may stop you from casting BT Sport from an iPhone/iPad to an Apple TV (for example EE).

If your main focus is watching movies in 4K and the latest series from Netflix and Amazon Prime, but not too worried about having 4K Ultra High Definition sport on your television, the Apple TV 4th and 5th generation boxes are for you. They provide a really clean user interface for viewing free to air programming, both live and catch up, which is the same in each room. The ability to add a network attached DVR is probably the thing that really clinches the deal as that means you can get the prized functionality of the latest Sky and Virgin set top boxes without the monthly subscription!

However, if you are a sports fanatic and want to watch your Football, Cricket, Rugby and Formula 1 in 4K Ultra HD you may need to maintain subscriptions to both Sky and BT and use their hardware in addition to having an Apple TV or one of the latest smart televisions to watch both Netflix and Amazon Prime in 4K.

See my other posts about Apple TV