I was recently asked to help solve a problem of printing web browser-based email from an iPad when I stumbled over what must be a common problem for a lot people. That is keeping emails, contacts and calendars in sync between Windows, iOS and Android devices.  I was also surprised to find that Microsoft Outlook provided a really elegant solution to  the problem of accessing  Apple iCloud Mail, Calendar and Contacts on a Samsung Galaxy S6 running Android 6.0.1.

The problem of syncing Mail, Calendar and Contacts across Windows, iOS and Android devices

My wife’s friend Karen recently bought an Samsung Galaxy S6 to replace an ageing Blackberry smart phone. Probably like a lot of people she has a number of devices for different tasks. In addition to the Galaxy S6, she has a laptop PC for running legacy PC-CDROMs and an iPad for email, messaging, browsing and media consumption.  Over the years she’s has acquired a Microsoft Hotmail account (now Outlook.com) and an Apple iCloud account. With the purchase of the Galaxy S6, she now has a Gmail account. Each email account is used for a different purpose. Hotmail is primarily for online shopping, iCloud Mail for keeping in touch with friends/family and Gmail purely for maintaining the contacts on her phone.

I was pretty sure I could sort out the email printing issue using the iOS Mail app on the iPad. I then looked to get all three email accounts synchronised on both the iPad (iOS) and the Samsung Galaxy S6. I am familiar with doing this on iOS, but I had never done this on Android before.

Adding Outlook.com and Gmail Accounts on the iPad

As Karen was accessing her Outlook.com  account via a web browser,  I suggested that we add the account to the Mail app on the iPad so that she could see all her iCloud and Hotmail emails in the same place. This was easily achieved through Settings in iOS by selecting: 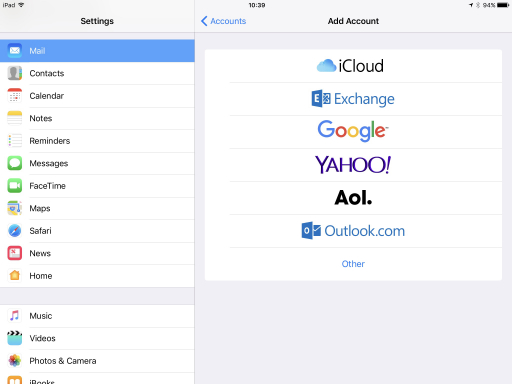 You are then offered a list of the most common email services – iCloud, obviously, Microsoft Exchange, Google, Yahoo, AOL and Outlook.com. You can also add any POP or IMAP based email service by choosing “Other”.  I had Karen enter her Hotmail email address and password into the Outlook.com sign in page that appeared next. We were soon up and running and not only did the emails start to show up in Mail, but we also had access to Contacts and Calendar information from Outlook.com in the respective iOS apps.

Once everything had settled  down we were able to successfully print the exhibition ticket, she had been struggling with, using iOS Mail. The original problem of printing an email with an embedded attached had been solved.

We then repeated the process for adding Karen’s Gmail account to the iPad. This time we chose the Google option when asked to Add Account. So far so good. We now had full access to Karen’s iCloud, Outlook.com and Gmail  accounts on the iPad,  but how do we get both Hotmail and iCloud to sync with the Samsung Galaxy S6?

It was pretty straightforward to get iCloud emails syncing with the Galaxy S6 using the out of the box email app. However, I found no way to sync Contacts and Calendars from iCloud with the corresponding Contacts or Calendar apps. I researched the problem online and quickly realised that the solution was to download one of a number of apps that either synced Contacts or Calendars with iCloud. As I am generally very wary of giving third party apps my email passwords, especially if I don’t recognise the developer, I discounted that option.

I then saw that Microsoft Office had been pre-installed on the Galaxy S6 and opened up Outlook. Using the settings in Outlook I was able to add both Outlook.com and iCloud and soon was able to see all the same emails, contacts and calendar entries that I could see on Karen’s iPad. In theory I could have added Gmail to Outlook but I’ll leave that for another day.

Note: If you’re using Two Factor Authentication on iCloud, which I strongly advise, you will need to generate an Application Specific Password on the AppleID site  to enable Outlook to connect to the iCloud servers. See more details here.

Keeping your emails, contacts and calendars in sync across Windows, iOS and Android is not impossible. It just takes a bit of figuring out if you have multiple email accounts as Karen does.